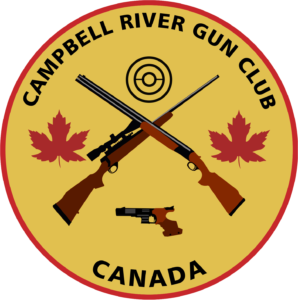 Safety through Education, Experience and Practice

In 1958 a handful of rifle shooters held a meeting in the Marina Hotel to draw up plans for a rifle club which started life as the Campbell River Rifle Club. The three primary people responsible for the formation of the club were; Ed Ariss, his son Garth and Kris Christiansen.

The first indoor range for the club was in the old Hospital Laundry building behind the village hall which they shared with the archery club for a $25.00 fee. A gravel pit near the old garbage dump was the outdoor facility which was used with the understanding that no permanent buildings were erected.

In 1963, the Archery Club moved out and the Rifle club was unable to afford the $25.00 fee to the members negotiated a drop to $12.50 from the Village of Campbell River.  By this time Smallbore Pistol had been added and the club was now the Campbell River Rifle and Pistol Club.  The first President of the club was F.H. (Hub) Camp who was also the junior director at the time.  Hub became well known in the area as a gun collector and superb gunsmith. The Ariss family continued to be very involved with the club through all these years as they served on most of the executive positions at various times and worked wherever was necessary to promote the club.  Garth continued to be an active member until his passing in June of 2000.

In 1963, the trap section was added with the merger of the Campbell River Trap club who had been shooting on the Spit. The Campbell River Gun Club now expanded rapidly. Around this time the Quinsam property was acquired and the Trap group moved their traps up to the new location.

In April of 1968, Robinson Trucking was hired to assist members in building a new outdoor range.  A new trap pavilion was built and covered firing points were put in for the 100/200 yard range.  On August 11, 1968, the club opened its new 30 position range by hosting a Vancouver Island Shooting League Championship shoot. There were 79 entrants with 10 teams in this first match. VISL competitions were held regularly at the range until its closure in 1996.

The club has continued to grow over the years with the addition of the indoor range which also serves as the clubhouse for meetings, dinners and dances. It is equipped with a kitchen, real washrooms with hot and cold running water (generally all the conveniences) and a large storage room for targets and equipment.

In 1993, the neighboring area had started to build up and people began to complain about the noise from the frequent competitions and practice sessions held on the Quinsam site. In 1996 the club was forced to stop using the outdoor facilities by the municipality and the search was on for a new location.  A small group of dedicated people led by the then President, Ken Jones finally located a piece of land about 15 minutes from Campbell River on the Gold River Highway.  Negotiations began with the government and a long-term lease was arranged.

On May 28, 2000, an official Opening was held at the new Argonaut facility to thank all the businesses who contributed to the ranges and show people we are still alive and operating. All the sections of the club provided demonstrations of their sport and food and refreshments were provided for the many officials and company representatives who had donated time, equipment and money to the building of the facility.  A new sign has been placed at the range thanking all these people.

We have come a long ways since those first days in the Laundry building.   The club has a great group of very talented competitors in each of the different sections and we have members of both Provincial and National teams all operating from our club.  There is also a strong group of trained officials and coaches who are always present to help whenever needed.